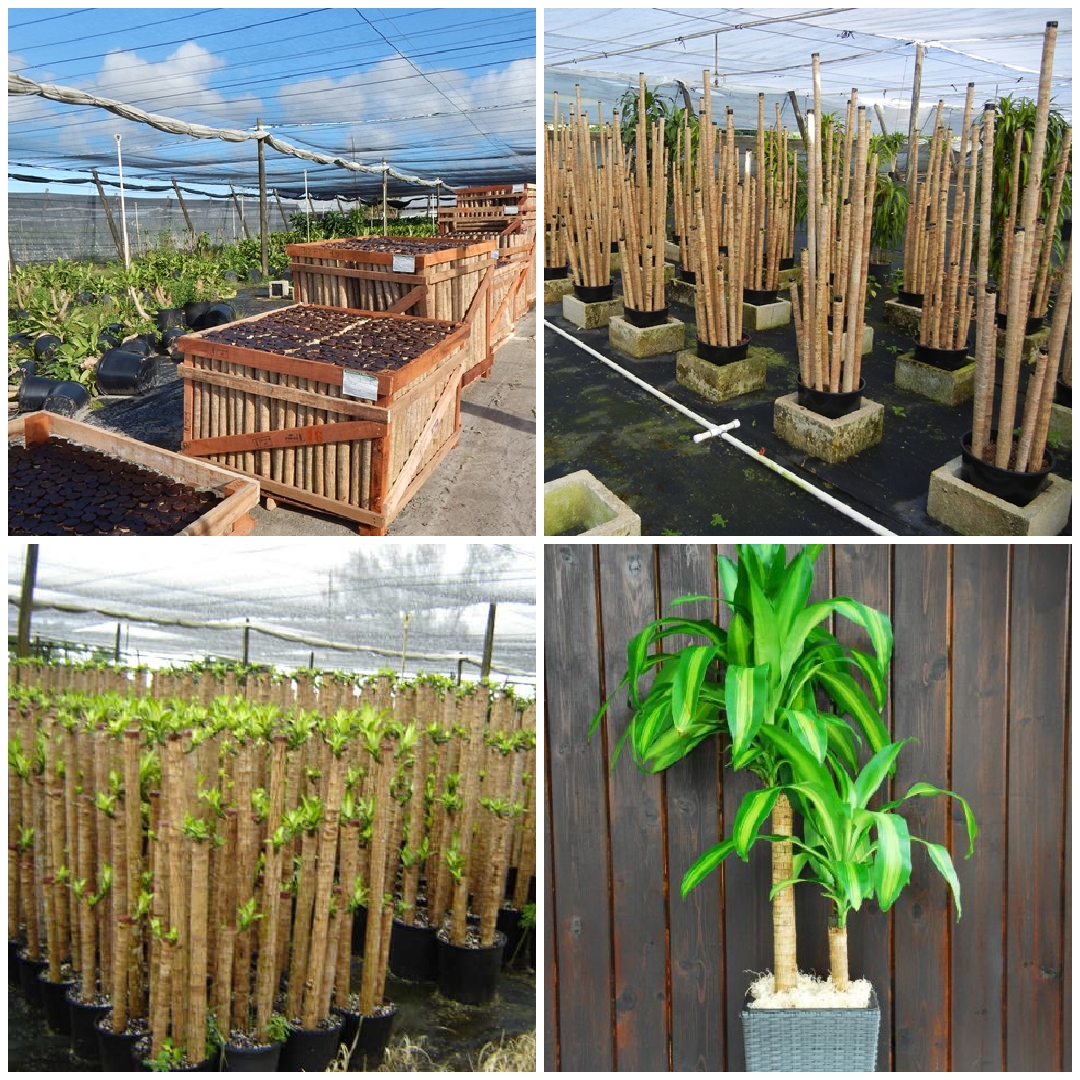 Costa Rica to Florida and on to Michigan
The potted plants we buy from Florida growers for interiorscape use are generally produced in one of two ways. Either plants are rooted from herbaceous or woody cuttings, or they are grown from seeds. Palms, for instance, begin as seeds, and take several years to produce. Pothos, on the other hand, are rooted from herbaceous cuttings, and can be produced in just a few weeks.
The species I find most fascinating as to production method is Dracaena massangeana cane.  The charm of the plant is the sturdy and straight canes, as well as the nice even heights of the staggered canes, evenly spaced around the grow pot. After seeing these plants in production in a Florida nursery, I understand how they can be so symmetrical.
The plants actually begin in Costa Rica, on farms that produce the stout, straight canes. Stock plants, many feet tall, are cut in the field. In a cutting shed, the canes are put through a table saw, producing level and straight ends and exact lengths. Both ends of each cane are dipped in wax to prevent moisture loss. One color wax is used to mark the top, another color for the bottom.
The canes are crated, and then fumigated. Plants coming into the United States from outside the country must pass USDA inspection. Once received at a Florida nursery, new crops are potted up as needed. A 10” diameter grow pot will receive 3 canes of proscribed lengths. Perhaps a 1’, 2’ and 3’ cane together. A 14” grow pot will get 4 canes, typically a 2’, 3’, 4’, and 5’ cane. The base of the cane may be nicked to remove wax and expose fresh cells under the thin bark, and a rooting hormone powder is often used.
The potting media is pasteurized, and the newly potted plants go first to a mist house, where they stay until the roots begin to sprout and secure the canes. Temperatures are usually kept between 75 and 90 degrees.
Once the roots are coming along well and multiple buds are beginning to break at the top of each cane, they are carefully moved from the mist house to the shade house, to continue root and leaf development for a few months. The goal is a well-rooted pot of canes with heads from 6-12” in size. We like to ship these plants boxed for extra protection, as they are heavy for their size and easily damaged if pulled about by a single cane. A typical grower might have 3-4 successive crops from mist to finished and ready to ship out.
Every crop has its own story and most growers produce several varieties of a species and often several very different species. There are tiny farms producing less than an acre altogether and huge farms with tens of acres under shade houses. Some sell direct, some only through brokers, and many do both. I love to ride around in a golf cart and tour crops with the grower or salesperson. I always learn something new, and typically see new varieties that I want to try in our designs.