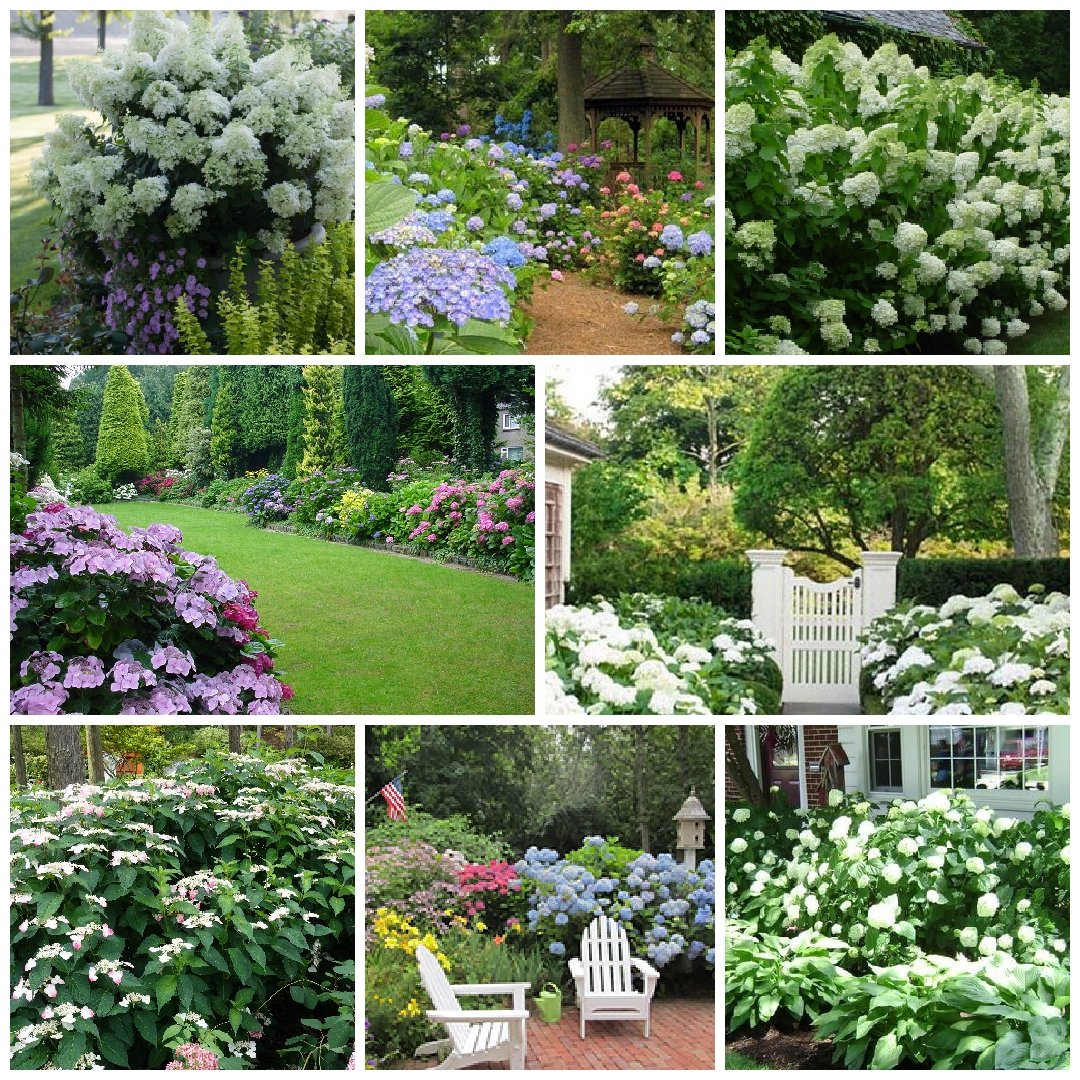 Hydrangeas
Hydrangeas produce a captivating display of flowers, and come in so many shapes, heights, and colors, which makes them the ideal plant for most gardens.  Hydrangeas can be planted as foundation plants, in hedgerows for privacy in the summer months, as garden focal points, and the dwarf varieties work well in a fairy garden.
Hydrangeas also make great transition plantings from a manicured lawn to a woodland. Larger-growing hydrangeas can help define rooms in a garden. The cool colors of the flowers, when used as walls, create the illusion of a much larger space.  Depending on how they are arranged, hydrangeas work well in formal, cottage-style, and woodland gardens.
There are six main types of hydrangeas:

Panicle Hydrangea: Hydrangea paniculata
The most cold-hardy Hydrangeas of all, H. paniculata, are known for their cone-shaped flower heads. The large blooms typically start out white and may turn shades of pink, before drying to beige. If left to dry on the plant in fall, they’ll stay looking good all winter. The flowers of Panicle hydrangeas aren’t subject to frost or winter damage in the spring, since they bloom on new wood.
Panicle hydrangeas can be tall and wide or compact depending on the variety, which means there’s probably one for most situations. Panicle hydrangeas are the only type of hydrangea that can be pruned into a beautiful tree. When in full bloom, hydrangea trees add elegance, structure, and dramatic effect.

Hydrangea ‘Bobo‘ and Hydrangea ‘Quick Fire’ are two of my favorite panicle hydrangea. 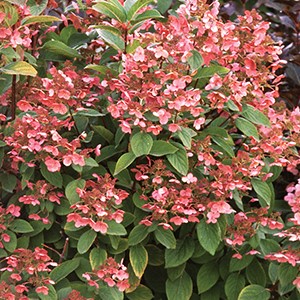 Hydrangea ‘Quick Fire’- blooms about a month before other hardy hydrangea varieties and flowers every year! Flowers open white then turn pink. Use as a specimen, mass plantings, and hedges. Reaches up to 8 ft. tall and wide. Zones 3 – 9. 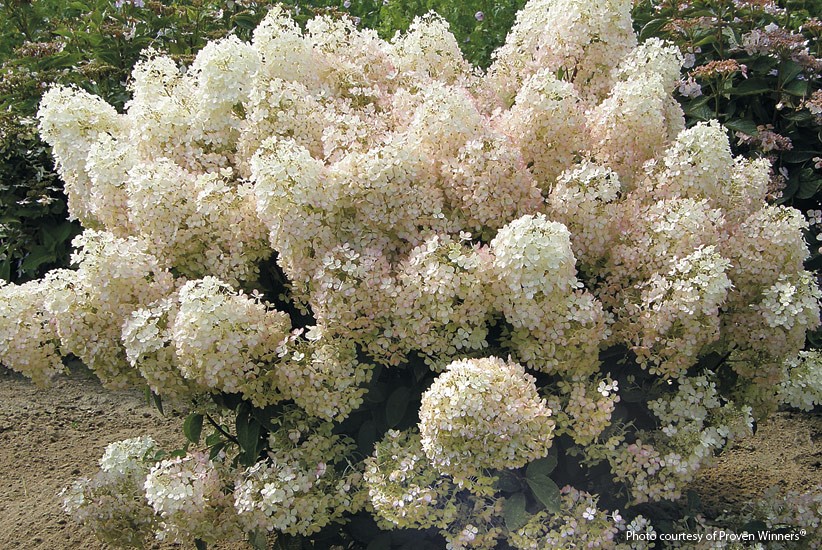 Hydrangea ‘Bobo’- covered all summer long with loads of large white flowers you see in the photo, on stiff stems. In fall, they blush a soft pink before turning brown for winter. Reaches 3-4 ft. tall and wide.

Smooth Hydrangea: Hydrangea arborescens
Sometimes known as wild hydrangeas, this type of hydrangea is acclaimed for its very large creamy-white flowers (although some newer varieties produce pink blooms). Hydrangea arborescens are native to the United States and are also very winter hardy, flowering on new wood. The rounded blooms open lime-green, change to creamy-white, to a tan shade in fall. Smooth hydrangeas typically grow 3-6 ft. tall and wide depending on the variety. 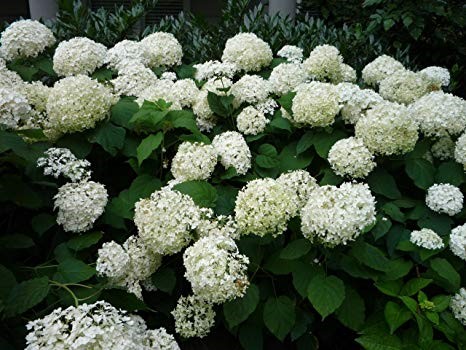 The best-known variety of smooth hydrangea is ‘Annabelle’ a favorite of mine, and many gardeners. I actually named my oldest Annabelle because I love both the plant and the name. ‘Annabelle’ is an outstanding flowering shrub that produces huge, rounded flower clusters, up to 12” across. The blooms on Annabelle are so large that they tend to bend to the ground after a rain. Many gardeners use stakes, or plant them along a structure such as a fence or foundation for support. 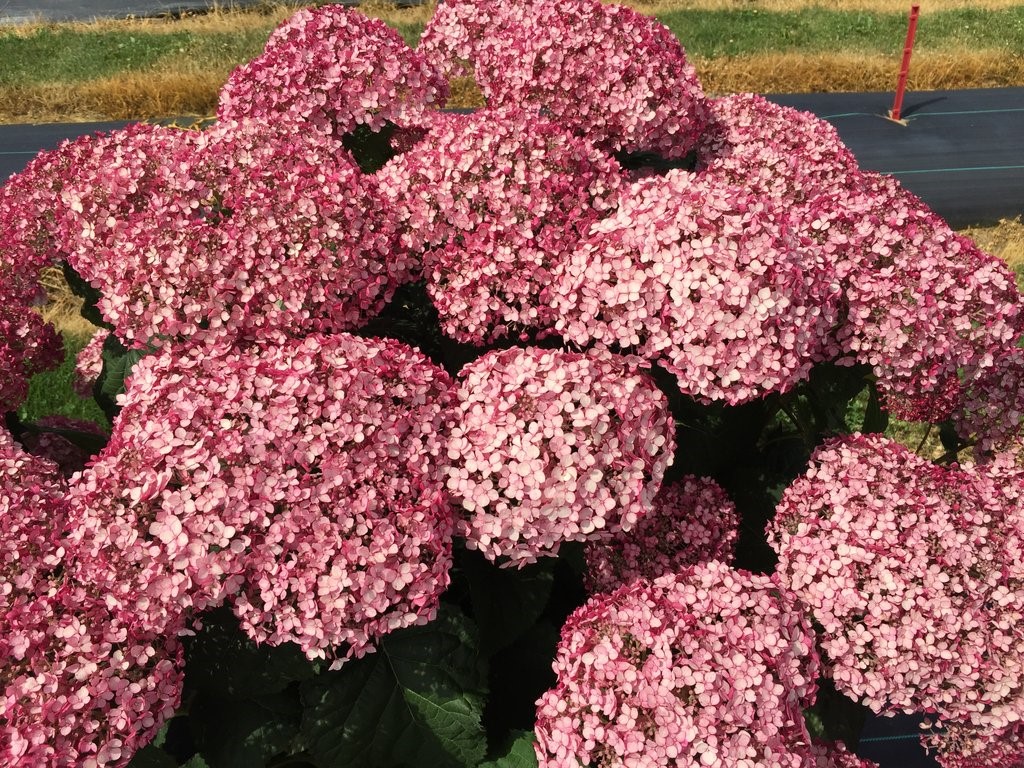 The Incrediball® Blush Hydrangea from Proven Winners® is a wonderful smooth hydrangea with very large blooms. The flowers are anywhere from light to dark pink. These shrubs are bred specifically for their large flowers, and the very strong stems that are able to hold the blooms upright. These are re-blooming hydrangeas and great for producing immaculate cut flowers for arrangements or bouquets. The plant is an improved version of ‘Annabelle’, with bigger flowers and sturdier stems.

Mountain hydrangea: Hydrangea serrata
Formerly listed and sold as Hydrangea macrophylla var. serrata, Mountain hydrangea is similar to bigleaf hydrangea (H. macrophylla,) except it is a more compact shrub with smaller flowers and leaves. Mountain hydrangeas grow in the same area of Japan as big-leaf hydrangeas, but they grow up in the chilly mountains instead of the mild coast. As a result, they’ve naturally developed better bud hardiness, which means that it will bloom even after harsh winters in zones 5 and 6.
Hydrangea serrata have a rounded habit that typically grows 2-4’ tall and as wide unless damaged by harsh winters or pruned smaller. Flowers appear in flattened clusters in lacecap form, with the scattered showy sterile florets forming an outer marginal ring around the tiny fertile florets. Plants are grown in alkaline soils for pink florets or in acidic soils for blue florets. 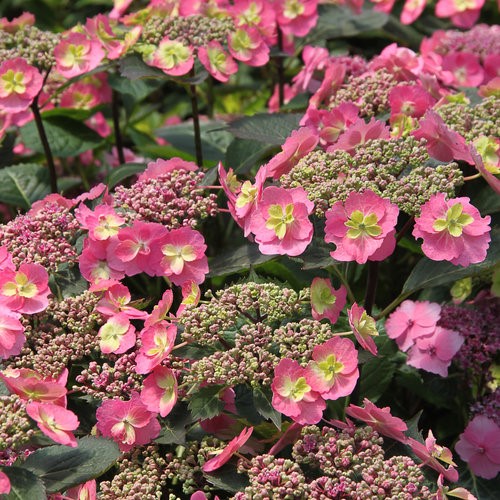 Hydrangea ‘Tuff Stuff’ is a new, hardy re-blooming Hydrangea that will provide months of enjoyment in the garden! Lovely reddish-pink lacecap flowers create a mass of color in early summer, and continue to bloom right up until frost. The semi-double to double florets begin with creamy coloration in the center before maturing to intense pink or blue.

Bigleaf hydrangea: Hydrangea macrophylla
Also called French or Mophead Hydrangeas, these small-medium shrubs produce very showy flowers. Like the mountain hydrangea, the soil pH affects the colors of the flower. While Hydrangea macrophylla are technically zoned for our plant zone here in Michigan, I avoid using them in my design and plantings. This type of hydrangea blooms on old wood, so unless you take care to burlap and mulch heavily in the fall, the flower buds and stems don’t usually make it through our harsh winters. If your hydrangea doesn’t produce flowers, it is most likely a bigleaf hydrangea and didn’t get the winter protection it needed. 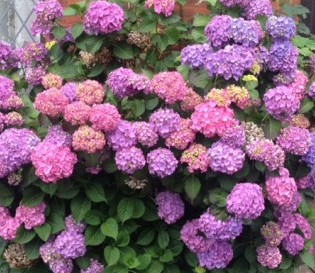 Oakleaf hydrangea: Hydrangea quercifolia
It is easy to see where the Oakleaf hydrangea gets its name. The leaves are shaped like those of an oak tree. This type of hydrangea is the only type where the foliage changes color in the fall. The foliage will change to orange, to red, to mahogany.  The Oakleaf is the only other hydrangea type native to the United States. A great advantage of Oakleaf hydrangeas is that it can thrive in much drier locations than other hydrangeas.  This upright, broad-rounded, multi-stemmed, deciduous shrub typically grows 4-6′ (less frequently to 8′) tall. It is noted for producing pyramidal panicles of white flowers in summer on exfoliating branches. 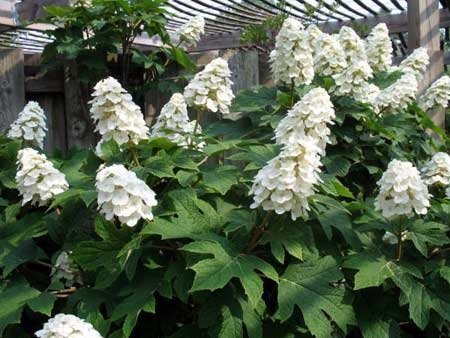 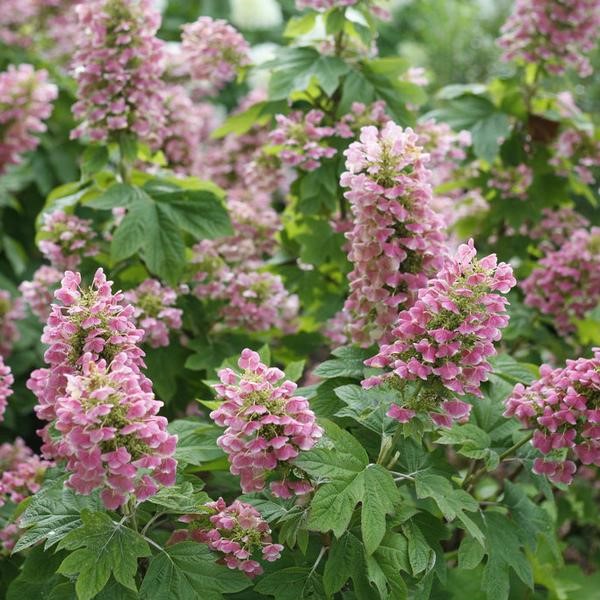 Climbing hydrangea: Hydrangea petiolaris
Climbing hydrangea are native to Asia and are commonly called Japanese hydrangea vine. These vines can grow in zones 4-8, and are unique in their habit of growing up structures such as trellises, brick walls, and fences. These vines can grow 30-40 ft. tall. However, they can be pruned to shorter heights. Unsupported vines sometimes grow in the form of a mounding shrub, 3-4’ tall, sprawling along the ground like a ground cover. It can eventually cover an area of up to 200 square feet. These plants are relatively slow growers the first few years after being planted, but once it’s established, they will grow quite vigorously. 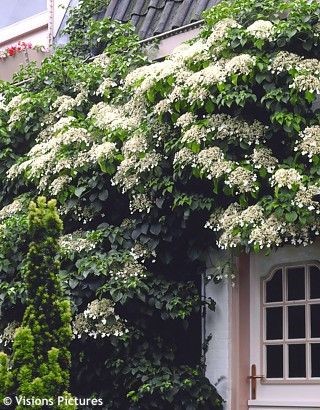 Hydrangea care:
Most hydrangeas bloom best in partial shade, but some will tolerate either full shade, of full sun.  Hydrangeas do best in moist, but well-drained soil. It is especially important that they stay moist for the first year.
A common question when it comes to hydrangeas is: Why isn’t it blooming, either at all or very much? Often, it is because of the variety planted. Bigleaf hydrangeas bloom on old wood. The old wood is prone to winter damage and the flower buds on the bigleaf hydrangeas are susceptible to frost damage. To minimize damage on this type of hydrangea, mulch heavily in the fall, and wrap the plant in burlap during the winter months.
Another reason hydrangeas don’t bloom is over-fertilization. Too much fertilizer makes the plants put all their energy into producing a lot of large leaves, instead of blossoms.
Pruning at the wrong time of year will also decrease flowers. Knowing when and how to prune can be a little confusing. A good rule of thumb to follow is little to no pruning. Carefully plan where you want your hydrangeas to grow, making sure there is enough room to fully grow. I usually keep the old flower heads on the plant until spring, for added winter interest. Clip the old flowers off just below the flower head.